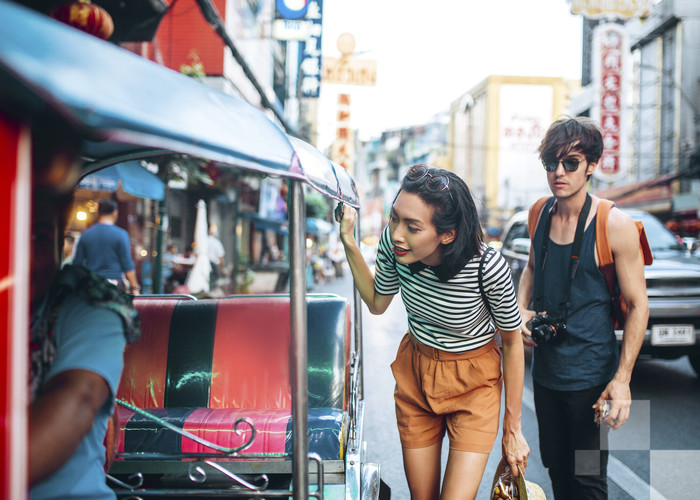 With travel, timing is everything – from choosing when to go to booking at the right time to reading up on what to do first in your destination. (We can help with all of the above.)

Luckily, when travelling to Thailand, there’s always something on in Bangkok. Whether you prefer partying until dawn or rising early to explore the Thai capital’s jaw-dropping temples, here are the best reasons to visit Bangkok each month.

1. January: Start the new year off with a bang 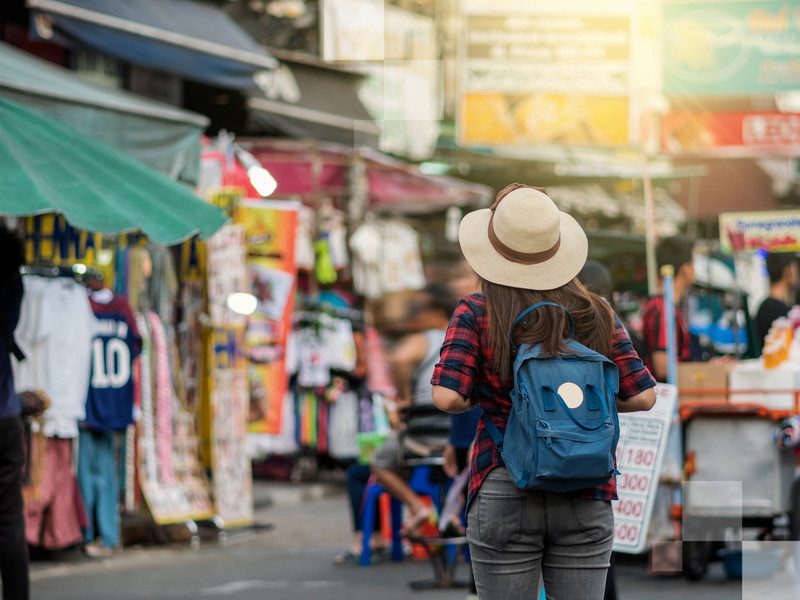 Make a New Year’s resolution to travel more, and then start immediately in Bangkok

Get a headstart on that travel resolution with a New Year’s holiday in Bangkok. The backpacker haven and epicentre of nightlife that is Khao San Road is always packed with partiers, but it’s taken up a notch to ring in the new year with a lively all-night street party.

For a less rowdy experience, CentralWorld hosts a countdown with concerts and fireworks, or head to Sanam Luang (the Royal Plaza) and watch colourful lanterns be released into the sky.

Sunny, dry weather beckons winter-weary travellers in the first few months of the year, but it’s the grand finale of the Bangkok Art Biennale that will draw crowds the first three days of February. The first-ever biennale brings together 75, mostly Thai, contemporary artists who will be displaying their works at a series of events that wraps up in early February. 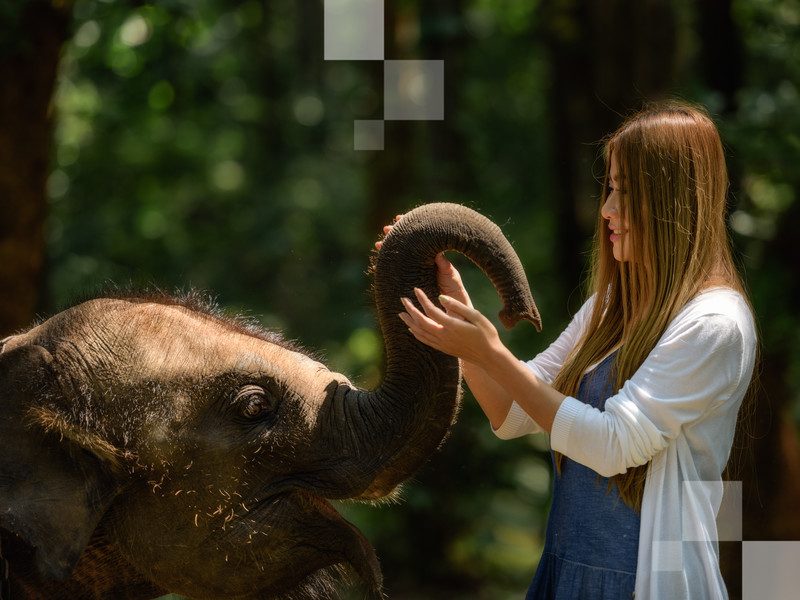 Spend quality time with elephants at an ethical sanctuary

In an effort to raise awareness and promote elephant preservation, the country commemorates Thai National Elephant Day (or Chang Thai Day) on 13 March. If you’re hoping to spend some time with elephants while in Thailand, always do your research to make sure you’re choosing an ethical experience.

If you’re visiting Bangkok and think visiting an elephant sanctuary would be too far to travel, think again. Wildlife Friends Foundation Thailand is located in Phetchaburi, about three hours drive from Bangkok, and the sanctuary will organize a return-trip for a fee. A full-day experience at the sanctuary is quite affordable at 1600 BHT (around 37 GBP), while transport to-and-from Bangkok will cost you 3500 BHT (around 80 GBP). Since they limit the number of guests each day, booking in advance is strongly recommended. 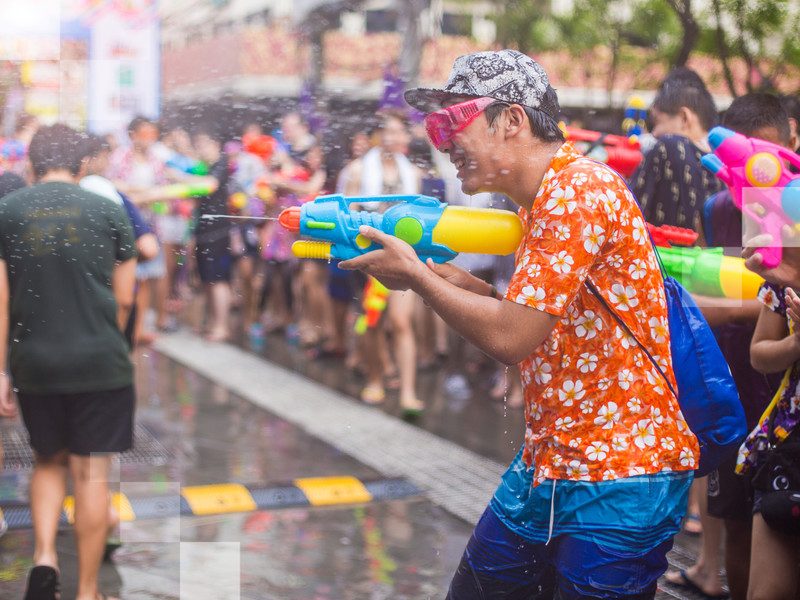 Pro tip: If you’re travelling to Bangkok during Songkran, prepare to get wet

What at first glance appears to be the world’s largest water fight, Songkran, the Thai New Year, is actually a religious holiday that ushers in the new year. Celebrated country-wide, visitors should not expect to stay dry during Songkran. (Which can be a good thing, since April is typically one of the hottest months in Bangkok.) From the minute you leave your hotel, locals and visitors alike will squirt you, hose you down, or douse you in buckets of water. Need a break from the waterworks? Head inside Bangkok’s ornate temples, which are peaceful places to escape the rowdy revelry. 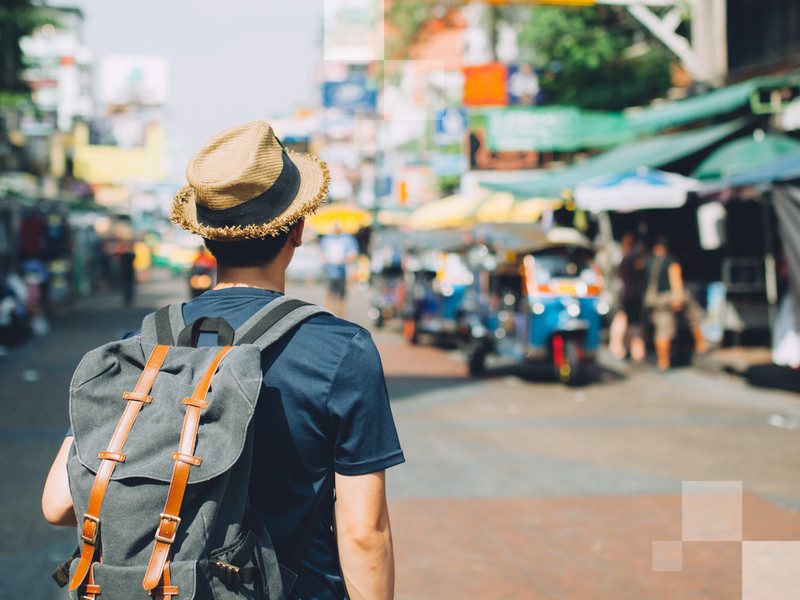 There’s a lot to like about travelling during low season

Our data shows that May is one of the most affordable months of the year for flights to Bangkok, with median airfare to the Thai capital at its monthly lowest. While the weather will certainly be humid, the rainy season doesn’t officially kick off until July, so it’s the perfect time to take advantage of low-season savings.

Escape Bangkok’s summer humidity and torrential rain by exploring its glam air-conditioned mega malls, many of which participate in the Thailand Grand Sale, annual shopping sales that take place from mid-June through August. According to our data, June is another of the most affordable months for flights to Bangkok, so why not spend some of that savings by doing a little savvy shopping?

Pro tip: Avoid hitting the shops during morning and evening rush hour when the newer part of the city (where the malls are located) is choked with traffic from tuk-tuks, scooters, taxis, cars and public buses. 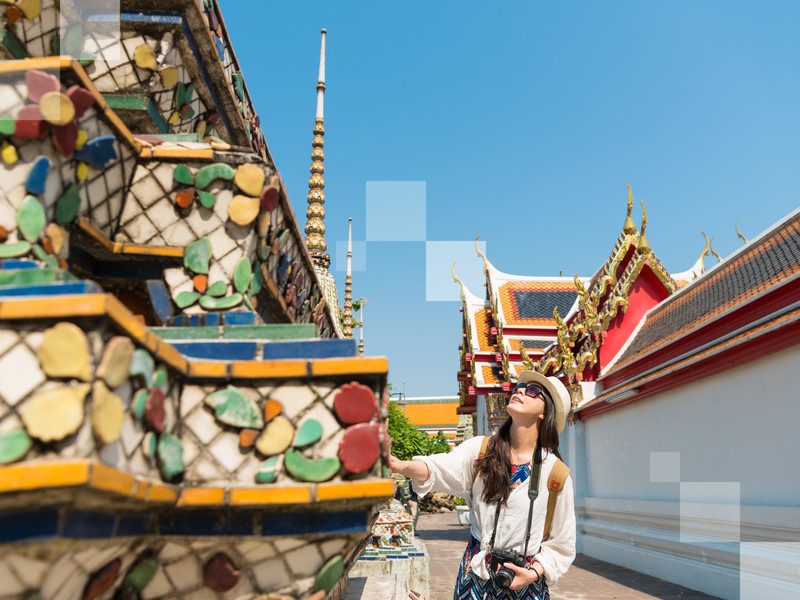 It’s hot in July, but if you’re an early riser, the temperatures won’t have reached their daily peak, making it a great time to set out exploring Bangkok’s most famous sights like the Grand Palace, a sprawling compound built in the late 1700s. Another bonus of arriving early is escaping – not just the sweltering, clothes-stick-to-your-skin humidity, but also the crowds. Don’t forget to stop by the Wat Phra Kaew (Temple of the Emerald Buddha), which is built on the grounds of the Grand Palace and houses an emerald Buddha carved into a two-foot block of jade. 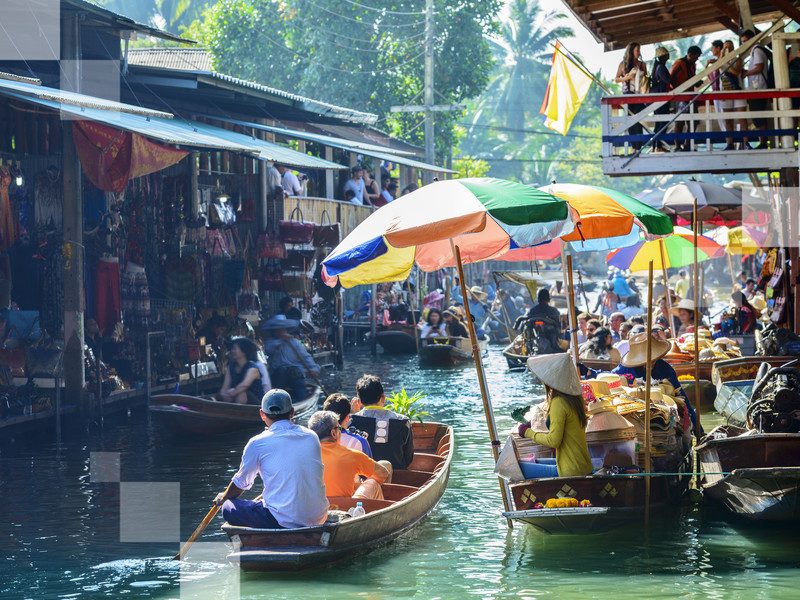 It’s still hot and rainy in August, but the excess of water is ideal for exploring Bangkok’s elaborate khlongs (canals), which have weaved through the capital since the 18th century. Travelling by motorboat along the Khlong Saen Saeh in the center of Bangkok and the Khlong Phadung Krung Kasem around the sparkling Grand Palace is a way of life for locals and a fun treat for travellers, as they zoom past wats, markets, shopping centres, office towers and teak homes. Cap off a day on the water by snacking on local favourites like Phad Thai and sticky rice with mango sold by street vendors every few blocks.

9. September: Marvel at the moon 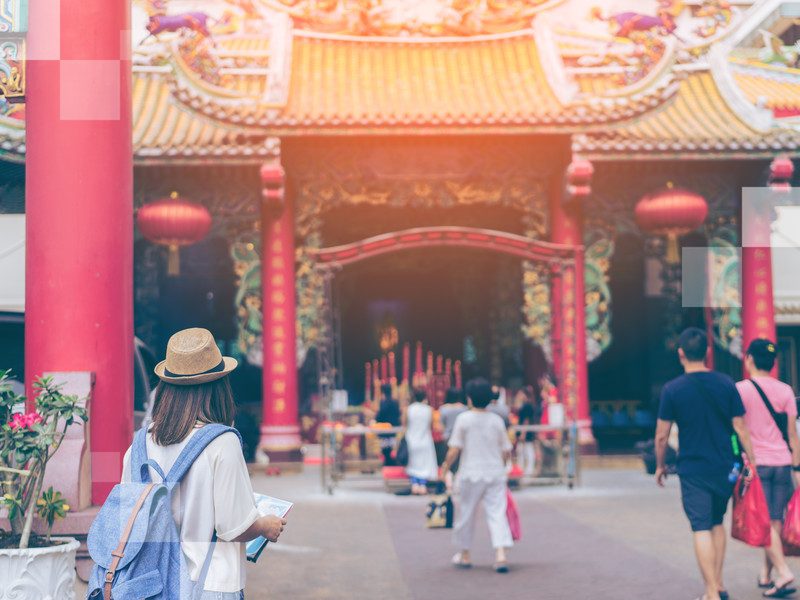 Thailand has an abundance of festivals, so chances are high you may encounter one during your travels. Time your holiday to align with a festival like September’s Mid-Autumn Festival, or Moon Festival, a traditional harvest festival that is celebrated by the Chinese and Vietnamese on the 15th day of the eighth month of the lunar calendar. The festival is widely celebrated in Bangkok thanks to the large Chinese population, so it’s the perfect excuse to celebrate in Bangkok’s Chinatown, one of the largest in the world.

While it’s the tail end of the rainy season, our data shows that October is one of the least-searched months for flights to Bangkok. Although this popular destination always draws a crowd, a less hectic experience can certainly be had travelling before peak season hits in November. If you’re hoping to find some quiet, indulge in a rejuvenating Thai massage. Don two-piece pyjamas, settle onto a bamboo mat and get ready for this quintessential Thai experience. Rigorous and rough to the uninitiated, skilled masseurs will knead, rub and stretch out all your stress at spas across the city.

11. November: Light up the night 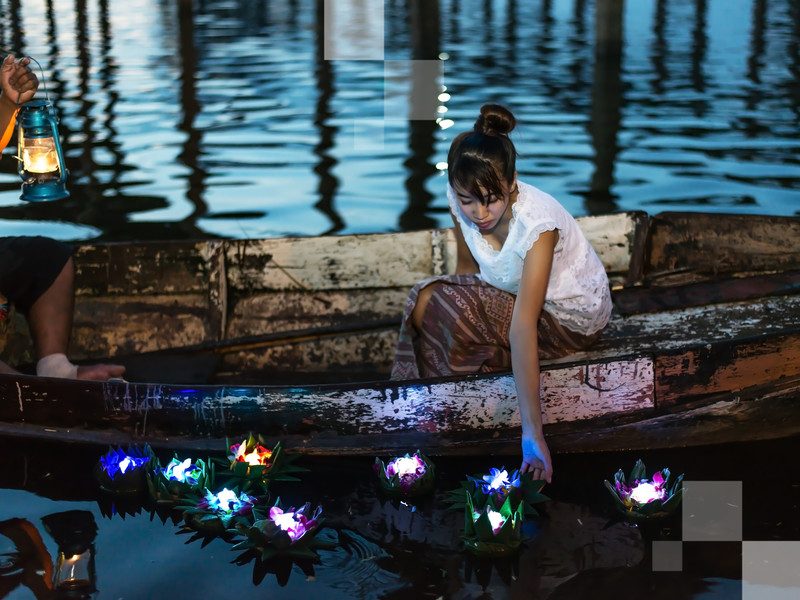 Marking the end of the rainy season, travelling during November not only ensures dry days and cooler temps, but also a colourful spectacle like no other. Known as the Thai Festival of Lights, Loy Krathong is celebrated on the full moon of the 12th month, which falls on 23 November this year. During the festival, locals ask Phra Mae Khongkha, the goddess of water, for forgiveness. This is done by floating banana leaves, adorned with colourful, fragrant flowers, red joss sticks and candles, along Thailand’s waterways like the mighty Chao Phraya River in Bangkok. It’s a symbolic way to send wishes downriver and wave goodbye to misfortunes. 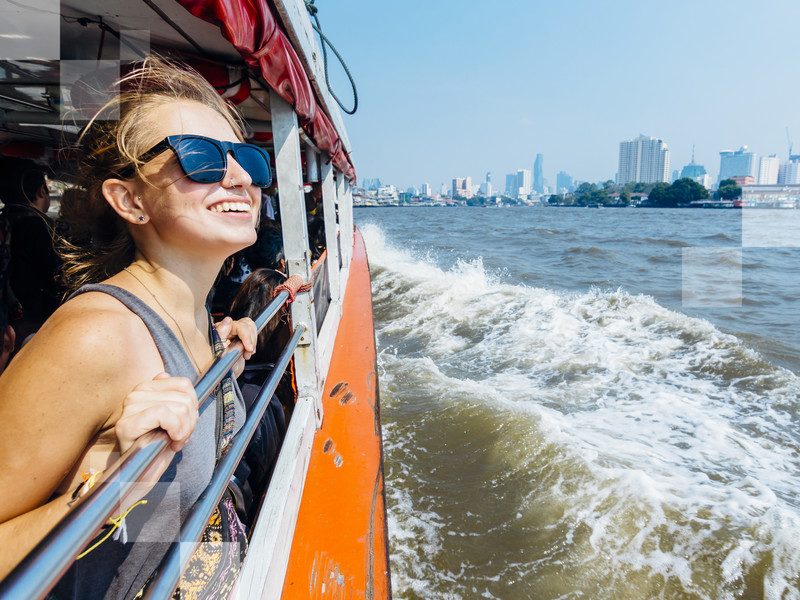 Travel in early December to avoid the crowds

According to our data, December is the most-searched month for travel to Bangkok thanks to the end of the monsoon season in November and cool(er) weather. Plan to travel earlier in the month before the high-season crowds arrive. Take a break from the city bustle and get picture-perfect panoramas by riding an inexpensive and breezy water taxi along the Chao Phraya River.

Properly convinced you need a Bangkok holiday? Head to KAYAK and search for flights and accommodation. Search with flexible dates to find the best prices. 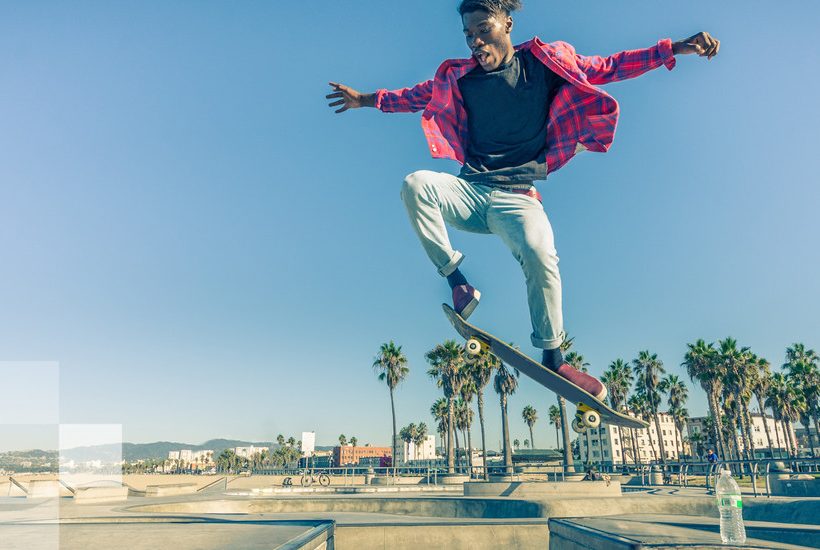 12 reasons to visit Los Angeles: the best reason to visit each month

Planning on visiting Los Angeles? Read on for the best reasons to visit L.A. each month and how to make the most of the city.
September 18, 2018‐KAYAK

When to Fly to Skip the Queue

We’ve been busy revamping our Airlines pages to give you information about your favourite airline all in one place. You...
August 14, 2015‐KAYAK 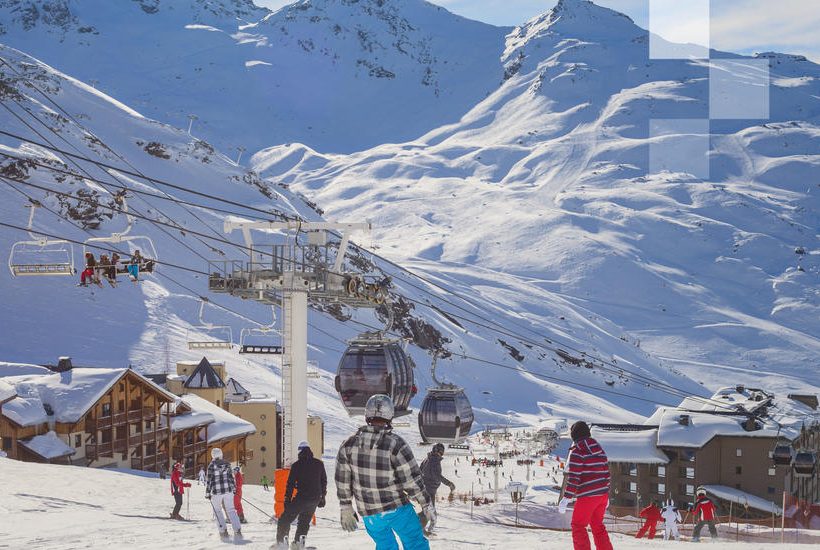 10 European ski destinations you should visit this winter 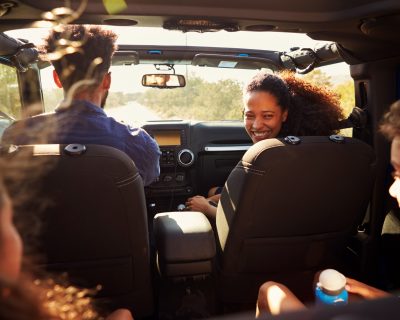