Good news for those planning their summer holidays – flight prices from the UK to most of Brits’ 20 favourite destinations have dropped by an average of 10% in Q1 of 2016, as compared to Q1 of 2015.

Here we take a look at the data and share some of the biggest drops for routes from the UK to destinations in Europe and around the world. Then, it’s over to you to plan your getaway.

Flights from the UK to European destinations were significantly cheaper for the first quarter of this year, than they were for the same time last year. The buzzing city of Berlin showed one of the largest drops in average flight prices for flights departing from the UK, decreasing 23%.

These price drops are particularly noticeable for individual routes departing from the UK to popular European airports. The flight from Gatwick to Dublin has seen a drop in average ticket prices by 23%, while Edinburgh to Amsterdam has seen a decrease of 21%. Meanwhile, passengers flying from one canal city to another, Manchester to Amsterdam, have also experienced a drop in prices on average of 21%.

Dreaming of the Big Apple? It’s never looked better. Flights from the UK to New York, the number one destination searched for by Brits, dropped in Q1 of 2016 by 15%, as compared to Q1 of 2015. For the best savings, depart from London airports, where the cost of flights to New York’s JFK have seen a drop of 20%. If you’re heading to the West Coast, you’ll be pleased to know that flights from Manchester to Los Angeles have fallen by 21%.

We’ve spotted this downward trend to other worldwide destinations too. Flights from the UK to Bangkok and Dubai – ranking as the second and third most popular destinations searched for by Brits – have also seen a double-digit drop in the average flight price: Dubai has fallen by 17% and Bangkok by 12%.

Where to find the cheapest flights

Europe is still the go-to holiday spot for UK travellers, with 45% of the most searched for holiday destinations. Amsterdam is the top choice, followed by Paris, Malaga and Dublin. Our flight analysis has revealed that Brits were able to buy flights to these destinations in the first quarter of this year from as little as £51.

Let’s hope this trend is here to stay. 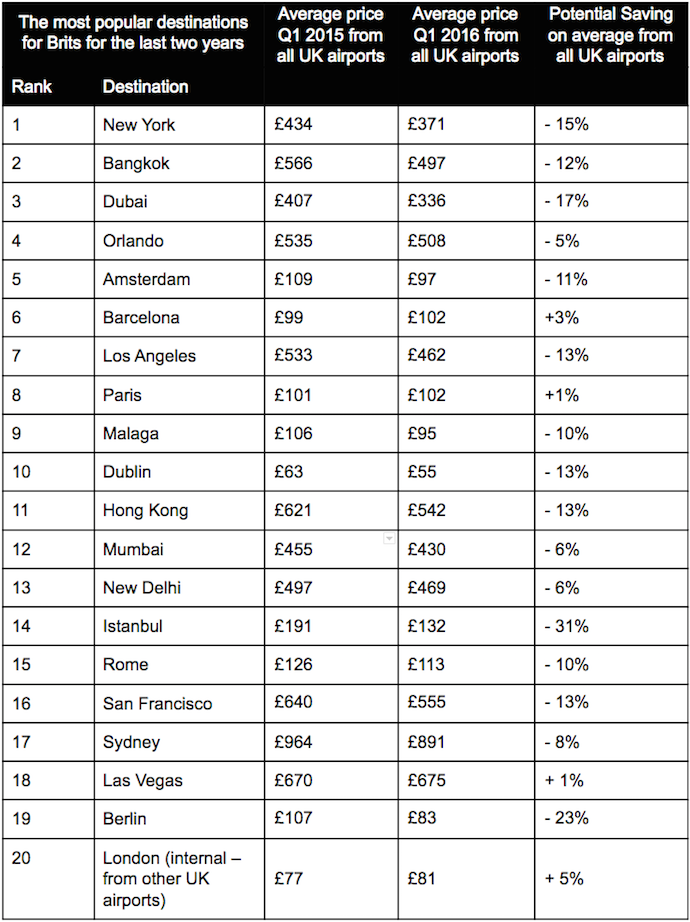 KAYAK.co.uk’s new Winter Escape Formula shows the overall costs for a week-long holiday, from airfares and hotel, to local drinks and transport, so Brits know where to go to seek the winter sun for less.
October 24, 2018 – Noam

KAYAK Blog UK | KAYAK News | Flight prices to Brits’ top destinations are on the descent
We use technical, analytical and marketing cookies to help you with things like logging in and picking up your search where you left off.
FacebookTwitterWhatsApp