You know that washed-out feeling; when you walk around a new city with a slight blur over everything. That wide awake at 3 am no matter what time you went to bed feeling. For most of us, travelling long haul and changing time zones means experiencing the effects of jet lag; never a fun time. It’s no secret that jet lag is a major inconvenience for Brits abroad, but do you how much jet lag actually costs us? We have carried out research, in conjunction with aircraft manufacturer Airbus, and have found out just what jet lag costs the United Kingdom, both for individuals and businesses.

The cost in days

The study, carried out among 1,000 UK adults who have travelled long haul in the past year, found that on average, 2.2 days of every trip is impacted due to the effects of jet lag; equating to a staggering total of 65 million days of holiday in the past year. Imagine you and a travel companion on a week away to Thailand; that means 4.8 days of your holiday are under the influence of jet lag.

It works the other way as well, walking into the workplace on a Monday morning after a return trip can have similar consequences.
The reduction in productivity caused by jet lag has impacted 53 million days of work in the past 12 months alone. Most of you estimate that you are only able to work at about 61% of your average level of productivity when suffering from jet lag, which equates to our workforce losing 20 million days of work every year.

Perhaps the best way to assess the negative effects of jet lag is to look at the monetary cost. With our concentration levels being so compromised by a flight-induced shift shift in time-zone, it’s no surprise that 49% of us say we’ve made a slip-up at work – costing an average of £38 per mistake. In fact, around ten percent of us say that their jet lag induced mistake cost their company over £1,000. That means that in total, jet lag cost UK businesses £241 million over the past 12 months.

And there are many other effects of jet lag; including falling asleep at work, forgetting phone or pin numbers, feeling slightly out-of-body, or, most worryingly, feeling that your health is suffering from jet lag induced stress.

What solutions are being found?

To address the issues that jet lag causes so many of us, aircraft manufacturer Airbus is exploring the science of light. As part of its ongoing commitment to passenger wellbeing, Airbus pioneered ambient lighting. The aircraft manufacturer offers a versatile LED-based technology with 16 million colour options, which an airline can purchase in any aircraft that Airbus provides. This ambient lighting can be found across the ceiling, sidewalls, entrance areas and even in the lavatories.

Instead of a clear switch between on and off, ambient lighting follows a slow and gradual change of the lighting levels that reflect how natural light keeps passengers circadian rhythms in check. This means you can enjoy a more restful flight and are far less likely to feel the effects of jet lag.

Dr. Achim Leder, head of jetlite – a cabin lighting startup supported by Airbus Bizlab – shared some of the science behind jet lag prevention with us: “Our research reveals that the sleep hormone melatonin is influenced by light and colours that favour relaxation and sleep patterns. This enables your body to better adapt to the new time zone. At jetlite, we have developed, during the Airbus Bizlab acceleration program, a jet lag reduction concept that includes lighting scenarios. These scenarios can be incorporated into the Airbus aircraft’s ambient lighting system to enhance passenger well-being and reduce the effects of jet lag”.

So while it’s easy to see jet lag as a minor inconvenience, the data shows that it’s causing us to lose millions of days of our hard-earned holiday each year – and hitting businesses in their bottom line. With that in mind it’s great to see that a company like Airbus is furthering it’s technology with the aim of addressing this problem to reduce the woes – and cost – of jet lag. 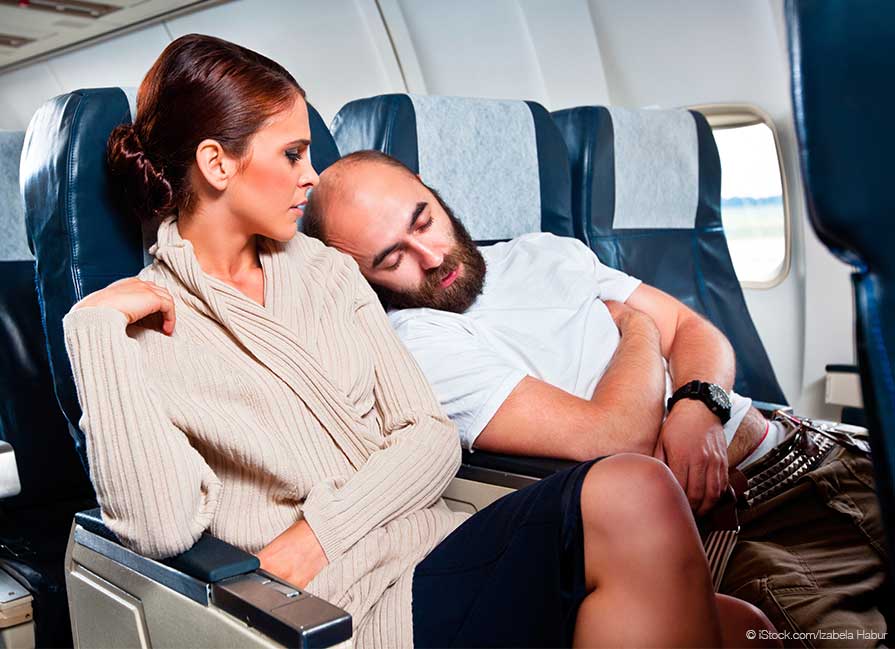 Despite being famed for our manners, KAYAK‘s latest survey reveals that all sense of British etiquette goes out the window as...
November 26, 2014 – KAYAK

Finding the right date to fly can help British travellers save up to 90% on flights to popular destinations from the UK. KAYAK.co.uk reveals data to help Brits learn how to score the best bargains on flights and hotels in their favourite holiday destinations.
August 29, 2018 – Noam

KAYAK Blog UK | KAYAK News | Jet lag: costing Brits 65m days of holiday a year
We use technical, analytical and marketing cookies to help you with things like logging in and picking up your search where you left off.
FacebookTwitterWhatsApp