Search hundreds of travel sites at once for deals on flights to Samoa. Bundle your flight + hotel and save! 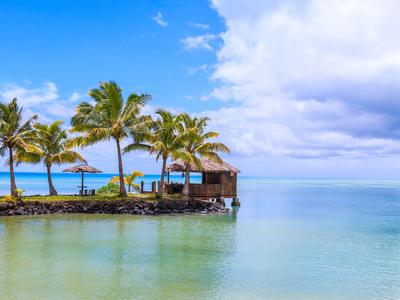 How long is the flight to Samoa?

An average direct flight from the United Kingdom to Samoa takes 39h 45m, covering a distance of 9722 miles. The most popular route is London - Apia with an average flight time of 45h 10m.

What is the cheapest flight to Samoa?

What is the most popular destination in Samoa?

Based on KAYAK flight searches, the most popular destination is Apia (100% of total searches to Samoa).

How does KAYAK’s flight Price Forecast tool help me choose the right time to buy?

KAYAK’s flight Price Forecast tool uses historical data to determine whether the price for a given destination and date is likely to change within 7 days, so travellers know whether to wait or book now.

Scores according to KAYAK customer reviews

Cons: "I think the food in our flight was not that good.."

Pros: "The crew was amazing"

Pros: "Crew were great. Flight was not full."
Cons: "Plane was a bit dated and the entertainment system not as good as the newer plane as choices are lesser."

Pros: "Flight was very pleasant and enjoyable, on time for both departure and arrival."
Cons: "Meals were served rather slow as we were last for row 45 but there was insufficient time for us to finish the meal, collection of trays started in 5 minutes time"

Pros: "The cabin crew were fantastic. Food was abundant. Most boarding systems worked well. Choosing seats was confusing on website so we were allocated seating. The newer planes had a fantastic touch screen entertainment system. The seats on the newer planes were much more comfortable and roomy"
Cons: "The small seats are squishy on the older planes. The entertainment system on the older planes were dated and difficult to use. I felt sick after the flight to UK but felt fine coming home after one long flight on a newer plane."

Pros: "The comfort and caring staff"
Cons: "Food serve a bit slow with the no of pax and long queue for the washroom"

Pros: "Friendly staff."
Cons: "The food for Premium Economy was very poor. The choices were substandard and the food at some meals was inedible. Very disappointing for the price of the tickets. The cabins and equipment seemed old and jaded."

Cons: "Please don’t use just fly.com ever. They cancelled my tkt and never accommodated a new one"

Pros: "Seats in economy were larger than United. Food was good for airplane food, even found a last minute vegetarian meal not ordered ahead. Appreciated a gratis glass of wine. Found a clean pillow and blanket in every seat upon boarding."
Cons: "My screen had to be reset twice as it froze up. The attendants kept taking my water cups despite them not being empty. Boarding was less than organized, could have been more efficient. We made up time, arriving a few minutes early even after departing late."

Pros: "Nice and attentive crew"
Cons: "Seat in the economy class is cramped and although the movie selection is quite ok, but the lack of touchscreen is quite annoying"

Pros: "Staff was polite and accommodating"

Pros: "Service is always excellent"
Cons: "Food however was very disappointing. Surprising as Singapore Airlines pride themselves on quality and the food was poor :-("

Cons: "Because the flight from IAD to London was cancelled, I never made it to this flight."

Pros: "Fantastic flight attendants never needed anything just a 1st class job definitely a 5 star airline thanks for everything"
Cons: "All good"

Cons: "Boarding at Singapore airport was shocking, as we had to wait 6 hours for our flight. Rating low to the crew mainly because of the ground staff as they were not very communicative to begin with about the explanation for our delay. Only when the passengers got a bit more vocal about wanting explanations, they started giving us a bit more information. All estimated times given for boarding the flight were incorrect by a big margin! Seemed more like they were giving shorter wait time for boarding just to please the passengers, where as they were well aware of how long the wait would be."

Pros: "Service is the best among the airlines I’ve ever taken"
Cons: "Never ever get free upgrade"

Pros: "Everyone was cold asking for blankets it was freezing on that plane only major complaint, I love the airlines, the flight attendants are lovely and gracious, they really do try. Such a nice treat after flying United airlines all year!"
Cons: "Too cold"

Pros: "The cabin crew are very helpful and friendly. I sat at the end of the row in the upper deck. After the gate door closed , they let me sit in the empty sit away from the toilets . During the flight they’re around with water and juices to make sure we’re dehydrated,"

Pros: "The staff was very responsive and the food was great. Ground staff in SIngapore helped me to modify the tickets due to us missing our connection to Phuket. Very helpful. Irene at the transfer desk was an excellent manager. The wheel chair staff was excellent all through."
Cons: "It would be great it the seats were leather so that plane would feel more cleaner."

Pros: "Comfort Great book the cook meal choices Restful Attentive service"
Cons: "What’s there not to like about SQ"

Pros: "Helpful staff and a comfortable trip. A plus all the way around"

Pros: "The crew was really great, so friendly and accommodating. I wasn't able to order a vegetarian meal ahead of time, but they still gave me one on board when I asked. There was an amazing selection of movies and they refilled my drinks without even asking. I would recommend this airline to anyone traveling to Asia."

Pros: "Best serves ever will fly every time"

Pros: "Clean aircraft. First rate and very attentive cabin staff. High Quality food and mid flight snacks. Its clear a lot of thought has gone into the making and running of this airline. My first experience and quite frankly I will fly SIA whenever possible."
Cons: "Cabin was to me a little warm during initial taxi at LAX. But not overly so."

Pros: "The food is good. The service is excellent, always smiling and attentive."
Cons: "Not enough quantity of each type of food. I did not get the cold noodle I want and end up eating sandwiches."

Pros: "Good reliable SQ service"
Cons: "I got the seat with communications box on the floor under the seat in front... no foot room :-("

Pros: "Professionalism and friendliness of crew"
Cons: "Seat not great for my length even though it was business class"

Pros: "Crew was very attentive and professional"
Cons: "Return flight the movies were the same as three weeks earlier."

Pros: "Service was great, food was alright, was able to move from a middle seat to a window."
Cons: "The flight I was supposed to take from Nanjing to Hong Kong by Hong Kong Airlines in the afternoon didn't exist so I had to take a morning flight. Was given no warning and had to check on my own. The Singapore Airlines flight was on time though."

Pros: "Excellent service, food, in-flight entertainment (what choices!!), and the plane was very up to date as well. Made for a very very pleasant flight experience. Especially for how long the flight was (18 hours or so)"
Cons: "The get out and get back in halt at Hong Kong. Practically the entire flight had to do this, quite wasteful. Bad customer experience. Find a better way please! If Hong Kong makes you do that switch over to another airport, better yet make no halt. I have flown direct from SF to Singapore before so not sure why this halt."

Pros: "Thank you flight itself was v good but not check in"
Cons: "Check in was terrible Long slow moving lines to just drop a bag! Can definitely improve as it is not like this anywhere any longer"

Pros: "Comfortable seats."
Cons: "We were supposed to fly back to Los Angeles from Tokyo on Wednesday, August 24th. We got to Tokyo Narita a little later than planned due to the Narita Express train being delayed. I had received emails that our flight had changed gates, and was then delayed, but when my sister and I went to check into our flight, we were told we were unable to board because it was too late. I thought it was absurd because the flight had not even started boarding, and I had gotten an email saying it was delayed. We tried to reason with them, but they would not let us on the flight. It was imperative that we got back to Los Angeles on Wednesday, but all our plans were ruined due to them bumping us off the flight. My sister had a connecting flight to Boston, which she then had to reschedule and was charged for. We were stuck another night in Tokyo, where we had to spend money on a hotel. The Singapore Airlines attendants eventually informed us that we could get on a flight the next day. This delayed us by 24 hours, which was highly inconvenient. It was also especially unnecessary since due to the flight being delayed, we would have absolutely been able to make it. I do not appreciate being bumped off of a flight due to airlines wanting to make more money, especially being stuck overseas. Its not like it was a domestic flight where we could just hop on another one in the next few hours, this totally derailed all of our plans. I do not appreciate the inflexibility of the Singapore Airlines agents, and this is not an experience that makes me want to recommend flying with Singapore Airlines. I appreciate that they did not charge us, however it was a major inconvenience that could have simply been avoided by better customer service and understanding."

Masks required on board, masks provided on flights to Samoa

Middle seats unavailable to book on flights to Samoa

Testing for antibodies, testing for symptoms for flights to Samoa