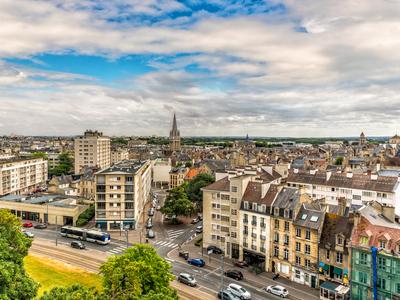 Are there Normandy travel restrictions currently due to Coronavirus?

France has restricted the entry of all travelers arriving from non-Schengen Member States. Nationals of France and their spouses and children, long-term residents with French residence permits and their spouses and children, long-term residents of EEA Member States, Andorra, Monaco, San Marino, Switzerland, the United Kingdom or the Vatican City and their spouses and children on their way home, and healthcare professionals may still enter the country. Airline crew, personnel of diplomatic and consular missions and international organizations with offices in France and their spouses and children, and merchant seamen may also enter. Travelers must have an International Travel Certificate to enter and transit France, which must be obtained prior to departure via the French consular offices abroad or online at https://www.interieur.gouv.fr. Additionally, travelers returning to a residence in France which is more than 100 km from their point of entry, or who need to use public transport during peak hours in Île-de-France (Greater Paris), must have a declaration form certifying their reason for travel. Travelers arriving in mainland France from outside the UK, EU (except for Spain), Andorra, Vatican City, Iceland, Liechtenstein, Monaco, Norway, and Switzerland are requested to comply with a voluntary 14-day self-quarantine upon arrival. Travelers arriving in overseas French territorities, as well as any travelers showing symptoms of COVID-19, will have to carry out a mandatory 14 day quarantine at home or in a facility chosen by the government.
There are currently 4,645,270 active cases of COVID-19 diagnosed in FR and 98,118 deaths as of 12 Apr 2021

How long is the flight to Normandy?

An average direct flight from the United Kingdom to Normandy takes 22h 05m, covering a distance of 240 miles. The most popular route is London - Caen with an average flight time of 29h 30m.

What is the cheapest flight to Normandy?

What is the most popular destination in Normandy?

Based on KAYAK flight searches, the most popular destination is Caen (100% of total searches to Normandy).

How does KAYAK’s flight Price Forecast tool help me choose the right time to buy?

KAYAK’s flight Price Forecast tool uses historical data to determine whether the price for a given destination and date is likely to change within 7 days, so travellers know whether to wait or book now.

Scores according to KAYAK customer reviews

Pros: "The rest area"
Cons: "The airport was cold and it should be warmer"

Pros: "The seats were bigger across the shoulder area and had more padding than some other budget airlines."
Cons: "Wish there was more elbow room in the seat. I am a big guy and I was having to squish myself so as to not interfere with my neighbor"

Pros: "Good selection of movies."
Cons: "Had to use a shoe horn to get into and out of my seat and I'm not a large guy. But really my harsh criticism comes from the loss of my girlfriends luggage. It was left behind in Paris on our way to Casablanca causing us to waste a day in Casablanca traveling back to the airport the grab the bag the next day. And to add injury to insult her bag was left behind in JFK during our transfer for our flight to Seattle. No big deal right, Delta will deliver the bag to our house the next day, wrong, we were told we have to go to the airport ourselves to get the bag."

Cons: "Boarding (by bus) was a total chaos. I had to stand for about 50 minutes, either on the crowded bus or, after climbing with great difficulty three flights of stairs to a high jet-bridge (I am 76), standing there forever with 200 persons waiting to get access to the plane. Totally unacceptable. They started the boarding process early (50 minutes before departure), but passengers were allowed to actually board the plane at the time it was supposed to take off."

Cons: "Seats were too close together."

Cons: "Kayak updated me that my flight would be late. It wasn't. Missed it had to pay $700"

Pros: "Crew was solicitous."
Cons: "They didn't seat a couple with a baby together which put me in the unpleasant place of being asked to give up my bulkhead seat for a window seat."

Pros: "Crew was wonderful and welcoming!"

Pros: "Red wine was excellent"
Cons: "Bright lights on throughout flight, would have been nice to dim lights for late night flight so passengers could rest"

Cons: "More water provided during the flight. Also, the second meal was not very good."

Pros: "The crew was friendly!"
Cons: "Once again no vegetarian options."

Cons: "The food was mediocre. Flying La Compagnie in the past was a much better food experience."

Cons: "I have never been in a situation were a flight has been delayed due to the co-pilot suffering a knee injury prior to take off. A request for a doctor on board after an hour or so and then having to leave the plane and then re-board after about 40 minutes was quite bizarre."

Pros: "Timely and smooth teansit."
Cons: "Food has a way to go to be appetising."

Pros: "Flight crew, pilot,food and entertainment options were great"
Cons: "Baggage took a while to reach baggage claim but maybe a bit impatient after a long day"

Pros: "Flight attendants were very nice"
Cons: "Didn’t have the meal I ordered Got in 30 min early but no gate for us. We waited over 80min on tarmac to deplane I paid extra for an exit seat but there was no indication when I did that there would be walls for armrests and that made it very uncomfortable for me"

Pros: "Great service, decent food"
Cons: "There was no WiFi on the plane"

Cons: "It is very difficult to get around CDG airport with a disabled person. There is no shuttle. By the time we got to check in, we were ten minutes late. They would not check us in, and we paid over $700 to change tickets to the next flight. When I complained, I was told to stop being rude or I would get no ticket at all. My mother is 94 years old and we did the best we could given the circumstance."

Pros: "Very helpful cabin crew and did well to communicate in English to me. Flight was on time and landed ahead of schedule"
Cons: "Entertainment system had to be rebooted as it did not work Small screen handset was not working for the entire flight food selection was not as big as KLM or China Eastern Bathroom on board was smaller than KLM or China Eastern which meant changing into more comfortable clothing for the night flight"

Pros: "The crew were nice."
Cons: "The boarding process was horrible and it involved climbing down steep stairs from the air tunnel to the tarmac to board a bus that took us to a far distance where the plane was parked. Had to new walk in the sweltering heat to the plane can climb up steep stairs in the heat! We were now kept in the plane for another hour with no aircondotion. It was boiling hot in there. We had to use the safety manuals to fan ourselves. We eventually left late and got to Lagos one and half hours we were meant to get there. Lastly not all the luggage arrived. Two days into my arrival and I am yet to get all my luggage. It was truly a horrible experience which was echoed by fellow passengers."

Pros: "Plane was comfortable and new."
Cons: "Nothing really."

Cons: "Airplane really old. Cabin configuration economy was in front of economy plus. Just 1 bathroom for economy and economy plus. Economy plus seats old and uncunfuttable ( more than it should be )"

Pros: "We got to the desk to check in and there was one person being served in front of us. He finished with him, turned and left the area through the dooor. No one came to help us for 15 minutes. Then they came out to answer the phone and said we were 10 minutes past the cut off and we could not fly."
Cons: "Staff just walked away while we were in line, the rudeness and mean attitude, they blamed us for being too late after ignoring us and made us late, they didn't offer an alternative flight until we asked. Overall, horrible customer service. Never been treated so rudely by people in the airlines industry in my entire 42 years of flying!"

Cons: "There were not noodle soup ready this time."

Cons: "only there were del;ay at JFK"

Cons: "The food: asked for vegetarian but got incipit vegan... Mostly rice with coconut milk"

Pros: "1) USB charger and electric outlet 2) Availability of 2-across economy seats (for a price) 3) Vegetarian dinner option available and not too bad 4) Flight arrived on-time"
Cons: "1) No on-board wifi 2) Not much seating room - very thin 3) 45 minutes late taking off"

Pros: "No delays, service with a smile"
Cons: "Nothing to report."

Pros: "Seats were comfortable with good recline. Food was good, but not excellent."
Cons: "They forgot the snack/breakfast service for the front right section of economy then had to rush it. Overall, the service was good, but some things just seemed off. An attendant call was never answered, etc."

Cons: "The food is awful The entertainment, i.e. movie selection, is not very good and doesn't change very much. The seats are not comfortable and my chair did not recline."

Pros: "movies were great, watched a lot of them food, while nothing to write home about, was at least tasty and not inedible the staff was great, friendly, welcoming, hard working loved that we could have wine and snacks"
Cons: "we had paid for the exit row and had a luxurious amount of room. But when we tried to sleep, our fellow passengers came and stood at our feet and talked so loudly that we could not possibly sleep. They stayed there for more than an hour. Would have loved for the staff to maybe ask them to tone it down, if not move."

Cons: "My entertainment system did not work for the whole 8 hours. Seats were uncomfortable. The lights above the seats broken."

Pros: "The seats were comfortable."
Cons: "The bag did not arrive. It stayed in Paris even though my first flight was on time. Connecting at CDG was a negative experience. Not enough time and unfriendly staff at the security check."

Pros: "The crew was nice .."
Cons: "We were very late for take off. Don't understand why No USB plug. No charging spots. No video. No movie. No radio. No wifi."

Pros: "Boarding and such was straightforward and easy"
Cons: "Everything is uncomfortable"

Pros: "Our flight from Prague to Paris was on time, very comfortable and inexpensive. Crew members were friendly and helpful."

Masks required on board, masks provided on flights to Normandy

Middle seats unavailable to book on flights to Normandy

Testing for antibodies, testing for symptoms for flights to Normandy